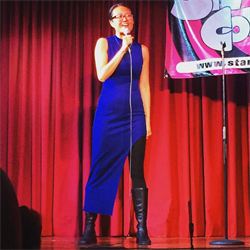 Hi all! Here’s a peek into my life outside psychic readings in Brisbane. As previously blogged, my July Blue Moon wish was to pursue Stand Up Comedy (read more on Blue Moon Astrology).

So I signed up for a five week course with Fiona McGary (who, incidentally, also sees 11:11 on clocks!). Here’s the result:

Background to this clip: Thank you to my soulmate, Kris Anderson for filming this show. You may need to Log In to Youtube to watch this video due to the age restriction.

DO watch it if: you like jokes about bogan Asian psychics. For the non-Queenslanders, a bogan is a term used to refer to people who live in a certain part of Brisbane which is known for its ‘unique characters’.

DO NOT watch it if: you don’t like swearing, M-rated content or jokes about bogan Asian psychics. Or if you are my Dad. Or if you get annoyed by the fact I have no nose and my glasses keep falling down. Or if you are pedantic about Asian accents and want to nitpick my Chinglish. Remember – this is my first show ever. You gotta start somewhere!

And for the record, here are the facts (which will make sense after you watch the clip):

I forgot I was Asian the first time I saw my office TRUE
I lived in Logan TRUE (those boots in the video came from an  charity shop there, they were $25 and a bargain…)
The last person at my housewarming was fleeing her ex TRUE
Her name was Shazza MY LIPS ARE SEALED
I have used nunchucks before TRUE
I got told I can’t drive by my 80 year old flatmate TRUE
She did her own concreting and tree lopping TRUE
I thought she might bury me TRUE
I hit a tree and so did my Mum – in the same car! TRUE
Kris thinks I am expensive TRUE (I make him eat organic)
Policemen pull me over and ask me to guess my speed TRUE
I told a cop to shove it up his rising moon MY LIPS ARE SEALED
I had a job as an inflatable apple before I was a psychic TRUE
My friend was the banana TRUE
She was claustrophobic TRUE
She threw up in her costume MY LIPS ARE SEALED
A young boy proposed to me while I was in fruit drag TRUE
I was educated about the birds and bees via email TRUE
I lost the aforementioned email MY LIPS ARE SEALED
I never charge my phone TRUE (hence my reliance on SMS)
I’m 3 months pregnant TRUE (blog post coming!)
I have crappy internet Also TRUE
COMEDY adds to 29/11 in numerology, my lifepath TRUE

Find Your Lifepath and 2015-2016 Personal Year Forecast
Who needs to make things up? Reality is more than enough. Enjoy!Huge gratitude to Fiona, Kris, the other students and my friends who came along for making my dream come true!! 11:11 forever. The purpose of my business is to transform the public’s perception of psychics (and their own intuition) from scepticism to trust. I do this through education, psychic readings and community-building.

A Cute Dream Story – When In Doubt, Telepath Your Whereabout(s)!

This site uses Akismet to reduce spam. Learn how your comment data is processed.