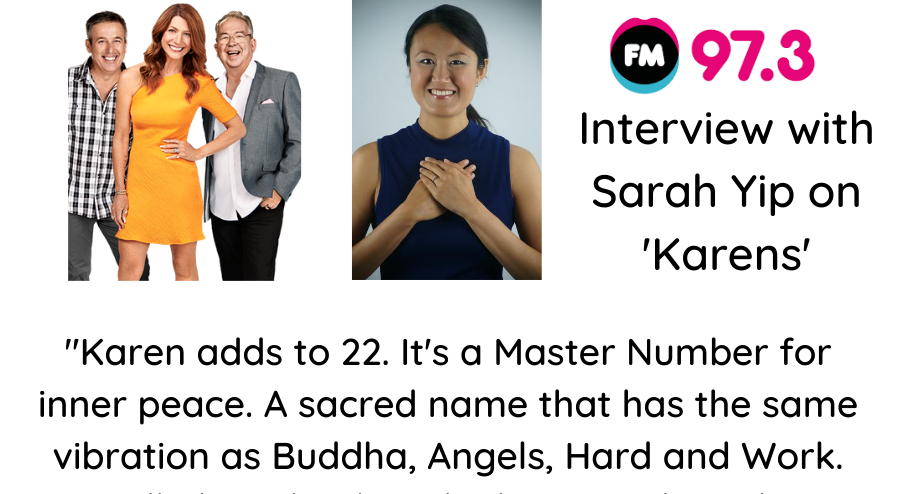 You must have heard of the Karen memes (about the abuse of white privilege)? Here’s my take on this sacred, heart healing name and why stereotypes and name-calling of any kind suppress free speech.

Thank you to 97.3FM’s Robin, Terry and Bob for your ongoing support. I love being your resident psychic! Can’t believe it’s been 7 years now.

Listen to this 5.5 minute interview on SoundCloud

Tip: To learn how to analyse your name, see my lifepath and name numerology webinar ($33) and psychic readings for famous people e.g. Karen Jacobsen (The GPS Girl, a famous Karen and good friend). You can also see the Pythagorean letter-number conversion table for free here

Interview Transcript (created with the help of otter.ai)

Bob: It’s 10 past six at 97.3FM Good morning. It’s Robin, Terry and Bob. I predict a beautiful Friday on the way. Look at that sunrise.

Robin: Oh that is just glorious. Not a cloud in the sky.

Robin: Yes, we are because names – what do they mean based on their numbers and in particular, the name Karen? Let us ask our resident psychic Sarah yip, a numerologist. Good morning.

Robin: Now, just let me check before we start talking to you about Karens, what did you say to us in March about the Coronavirus?

Robin: There we go.

Sarah: You said it would only be a few weeks, but I said it would be much longer. See my 97.3FM Interview on Coronavirus, Numerology and Spiritual Speedhumps (4min)

Robin: So okay, Sarah, tell us what do you think will happen with it now?

Sarah: Yeah, I think people will start reopening from September but I think that there’s going to be a lot of hesitation until early next year. It’s something that has shocked a whole generation of people.

Robin: Sarah, you do a lot of numerology and numbers and I saw that you’ve looked at the whole issue around Karens. What do you think about that?

Sarah: Yeah. That caught my attention because I think anything where we are blanket stating things can be quite suffocating. It can really impede free speech.

It’s fantastic that we’re calling out abuses of power and privilege. But a lot of women I’m talking to, are really starting to censor themselves, especially if they’re white, middle-aged and in a position like a managerial position. And that’s dangerous because we need everyone at the table right now. And I did a little bit of numerology on the name, Karen. Do you want to hear what it means?

Bob: Yeah, I just don’t quite understand how you get to the numbers. I play Scrabble, K is worth five and N is worth one. I get that. Is there a numerical value to the letters in a name?

Sarah: Yes, it’s like cosmic Scrabble. Like original cosmic Scrabble. A = 1, B = 2, C = 3.  It’s all on my website, sarahyip.com. Karen adds to 22. It’s a Master Number for inner peace. A sacred word and a sacred name that has the same vibration as Buddha, Angels, Hard and Work. It’s all about healing the heart and teaching forgiveness. So interesting that they’ve used it as this byword for bad behaviour.

Robin: That’s weird, if that’s numerologically what Karen means then it seems like it is the exact opposite of what it should be used for?

Sarah: In numerology, we believe everything is just potential. It’s just ingredients. It’s up to you how you cook it, you could let them go off, or you could make them into a delicious pizza.

Terry: Okay, so the Karens you’re saying they have the potential to heal the world. What about Karins? Are they gone too far in terms of pronunciation?

Sarah: It just depends on how it’s spelled. They’re all related. It’s like you’re psychic (note: because he said Karin, which sounds phonetically like the tribe I mention next). I used to live in Thailand and the Karen tribe there are in peril, there are a lot of human rights abuses.

There’s a subset of the Karen (note: they are called the Paduang) who are known for their tradition of wearing neck rings. You know, those women with the long gold neck rings? They’re the Karen. And so I was thinking maybe there’s something about the name Karen or Karin and sticking your neck out in a way that’s really shocking.

Sarah: I went there! I’m Asian, I can go there.

Robin: (3min 33sec! Funny, because Robin is a 30/3 Lifepath Artist – see her numerology and palmistry reading or find your lifepath) So quickly Sarah go through our names. What’s Terry’s numbers?

Sarah: Terry has a 32/5 name, The Rebel. The same vibration as Dragon, Tiger and Fairy. He adds magic, passion and lift off to the team.

Terry: Like it. Let’s just stop there. I’m loving it.

Sarah: Bob adds to 10/1, which is The Pioneer. His name has the same vibration as Man. So Bob, you are officially The Man, officially one of a kind.

Terry: Look at you go Bobby.

Robin: And me, Sarah?

Sarah: Robin, your name is a 31/4. That is the same as the words Healer and Garden. So I like to think you bring fresh ideas to people that get them back to their true nature.

Terry: Does anyone ever come up with a bad number? And you say, wow, it’s all in your name.

Robin: Is there a dodgy name?

Sarah: Because I wear glasses, I can always say, ‘Oh, there’s a smudge on my glasses. Give me a sec.’ Yes, sometimes.

Robin: Okay. Thank you very much. I know. I noticed you didn’t say there were any names that are dodgy. So we’ll just go with that.

Terry: That’s where we started.

Sarah: (4min 44sec – funny, another Angel code 444 – for follow your heart). You know, I think everything can be zhooshed. I’m an optimist. I have like the world’s most common name, Sarah. So I’ve spent a lot of time thinking about how I could zhoosh it.

One day I realised there’s hardly any psychics called Sarah. So that’s worked for me. Whatever you’ve got. You just got to own it.

Terry: Sarah, zhoosh your way into the day. Thank you very much.

Sarah: Thank you so much for having me back. It’s great to hear your voices again.

Terry: Thank you, Sarah. You know what’s coming up next in the show?

Terry: I’m not telling you because I’m a rebel, I’m a trailblazer. Just check the numbers in my name.

Robin: What has she done?

Terry: You’re a pioneer Bob, explains the flannel shirt you are wearing today.

PrevPreviousWhy Your Child Chose You – Family Numerology Webinar now online! Plus $11 Discount Code
NextLife Path 6 Numerology – The Pros and Cons of Being a Spiritual Visionary and LoverNext