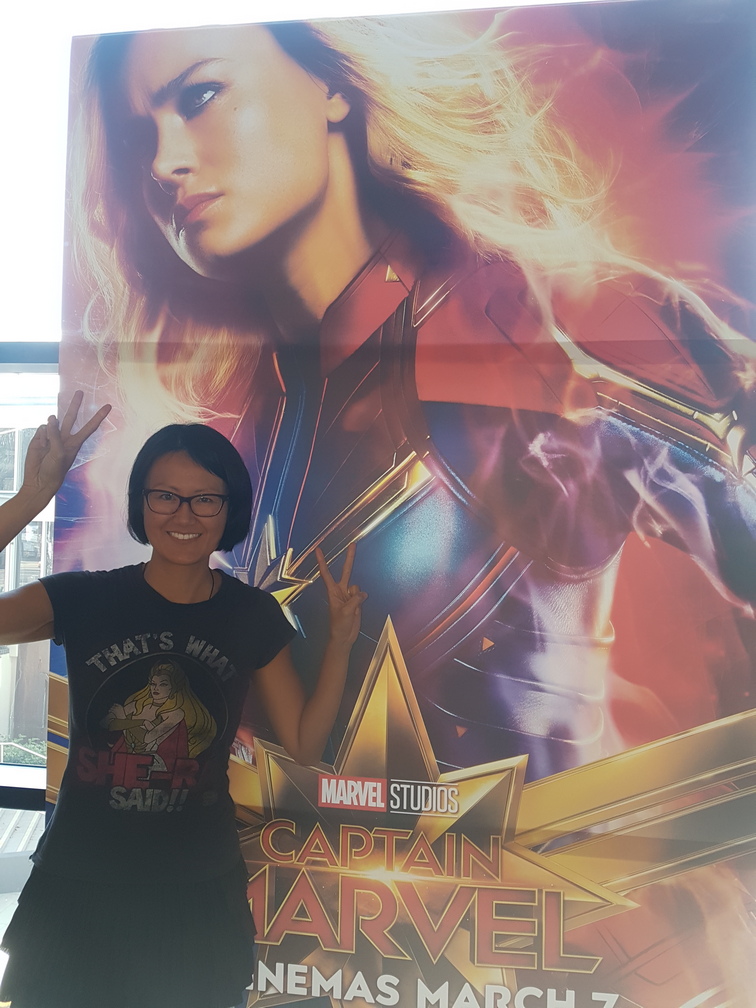 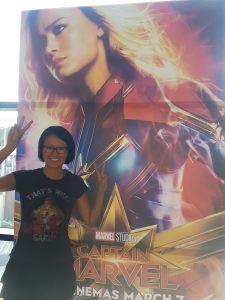 Captain Marvel is the first Marvel film with a female lead actor, and what a superstar she is! Here’s a look at some of the numerology behind this blockbuster. I’ve focused on the lead actors, Brie Larson and Jude Law for brevity’s sake. If you have more questions about this movie, let me know. I’ve done my best not to include spoilers.

I highly recommend seeing this film. It’s made with heart and left me feeling good about the future (which is a nice change from most Hollywood productions). It’s very funny and would be a great movie marathon with Wonder Woman starring Gal Gadot.

Brie Larson’s Numerology – Born to Shine
Brie Larson, born 1 October 1989, is a Master 29/11/2 lifepath in numerology, aka The Spiritual Messenger. Words like Light, Wisdom, Gypsy and Starseeds have a 29/11/2 vibration (see the word analysis system I use). Your lifepath (the sum of your DOB), is a code that reveals your cosmic job description. It also suggests the ages you’ll mature (e.g. 29, 11 and 2 for Brie, see more below).

If the sum is 11/2, 22/4, 33/6 or 44/8 you have a Master Number lifepath (I prefer Double Number as it’s less loaded than ‘Master’). This gives you potentially twice the energy and opportunities to change the world. You still have free will, of course. Many people with Master Numbers in their numerology (lifepath, name etc.) see 11:11 and repeating numbers when they are ready to wake up to their abilities. They also tend to relate to superheroes (Christopher Reeve was a 33/6). FYI I am a 29/11 lifepath too. Find your lifepath

As a 29/11/2 lifepath, Brie is here for double beginnings and female empowerment. How perfect, as Captain Marvel goes through difficult rebirths in this movie, too. In numerology, each number correlates to chakra, which you may know about if you’re into yoga or Reiki. The 2 in Brie’s lifepath is about feminine healing, patience and intuition (Sacral chakra), while the 9 is for global change, philosophy and rewriting history (Soul Blueprint chakra). The double 1’s look like two people standing in equality, reaching for the sky.

Many famous people have a 29/11 or 11 lifepath, see this post. I laughed so much when ‘Just a Girl’ by No Doubt played in the movie, because that has great meaning to me. Gwen Stefani is a 29/11 lifepath, and I was almost thrown out of a feminism lecture in University for talking while this song was played by the old, white, male lecturer. Why? Because I said to my friend ‘I love this song!’

According to her Wikipedia entry, Brie was a shy child, born to parents who were homeopathic chiropractors. She was mainly home-schooled and experienced trauma when her parents separated just after she’d begun acting at 6-7. Soon after, her mother moved her two daughters to Los Angeles to help Brie’s career. At Brie’s childhood lifepath turning point of 11, she learned to play guitar – many sensitive people find relief in music, as sound healing is very calming for the heart.

Brie grew up in an all-female household, without much money (I had a similar experience). She’s played many roles in films about complicated families, mental illness and abuse, e.g. Room was a woman who’s been kidnapped and bears a child from rape. She’s also a known supporter for gender equality and activist for sexual assault survivors. Her outspoken political stance has resulted in heavy criticism and trolling online e.g. the attempted review bombing of Captain Marvel.

How Divine that Brie is 29 (her adult lifepath turning point) and being celebrated as Captain Marvel. What timing! At 29, I was transitioning from charity fundraising into the spiritual industry, after being given The Life You Were Born to Live by Dan Millman – see my psychic reading for him. This book is an incredible resource regarding numerology and lifepaths.

Hint: Brie’s other name in the movie is Carol Danvers. In numerology, these names reduce to 22/4 and 29/11. More synchs!

Relationship Numerology & Captain Marvel
-Brie’s co-hero in Captain Marvel, Nick Fury is played by Samuel L. Jackson. Samuel is a 28/10/1 Pioneer lifepath, here to be an action hero and inspire independence. Together, they have a 3 relationship (comes from the sum of their lifepaths, i.e. 2 + 1. Brie’s 11 reduces to a 2, as we mostly operate at our simpler vibration in relationships). 3 partnerships are great for teamwork, creativity and positive change. FYI, if we didn’t reduce Brie’s lifepath, 29+28 = 57/12/3, the vibration of Love and Light. Beautiful.

I’ve found that 11 lifepaths and 1 lifepaths have a natural attraction as they are both restless explorers. I’m a 29/11 lifepath, married to Kris Anderson, a 28/10/1 lifepath (he’s also a Tarot Reader, Aikido black belt and TV actor.) We certainly have a wild time together.

-Brie’s other co-lead, Yon-Rogg is played by Jude Law. Jude is a 33/6 lifepath (see more below). Together, they have an 8 relationship, which tends to be more of a business or work-related partnership, that can heal each person’s faith in God/ Good/ The Universe.

-Brie’s best friend in Captain Marvel, Maria Rambeau is played by Lashana Lynch. Lashana is a 36/9 Old Soul lifepath, here to rewrite history and teach forgiveness. Together, they are an 11 relationship. 11 partnerships bring illumination to everyone involved.

-Brie’s recent ex (off screen), Alex Greenwald, is also a 36/9 Old Soul lifepath. They dated for several years before breaking off their engagement last month. I often see relationship changes around someone’s adult lifepath turning point, as we rapidly evolve at this time and may outgrow our inner circle.

Jude Law’s Numerology – Here to Provoke
Jude Law, born 29 December 1972, is a Master 33/6 lifepath in numerology, aka the Master Healer. Words like Teacher, Priest, Rockstar and Wake Up Call have a 33/6 vibration. As a 33/6 lifepath, Jude is here for double communication and opening minds. In Captain Marvel, his character Yon-Rogg certainly knows how to use the power of words to influence other people, for better or worse.

The 3 in Jude’s lifepath is about creativity, communication, and personal power/ charm (Solar Plexus chakra), while the 6 is for vision, ESP, love and service (Third Eye chakra). The double 3’s look like two people speaking up for/ birds flying towards, a common future.

According to his Wikipedia entry, Jude’s parents were teachers (how synchronous – perhaps they had Master Numbers too). Around his adult lifepath turning point of 33-34, he appeared in The Holiday, his first modern role after many period dramas and sci-fi movies. Soon afterwards, his career skyrocketed. At the time, he was active in charity work with his ex-wife, Sadie Frost. He also admitted to an affair with his children’s nanny, which led to a separation from Sienna Miller just before he turned 34.

I’ve worked with many 33/6 lifepath clients and colleagues and they are notable for both their work ethic and their candidness. As difficult as the truth may be to hear, they are ‘whistle-blowers,’ who deliver important messages to the public and their loved ones.

Politicians Jacinda Ardern, Pauline Hanson (!) and Scott Morrison and other famous 33/6 lifepaths you may have heard of, while actors like Bruce Willis, Jessica Alba, Jessica Chastain, Meryl Streep, Robert Pattinson and Sarah Michelle Gellar are also 33/6’s. I have a full list of Famous 33/6’s in my lifepaths webinar, and a partial list in my 33 lifepath article. You can see that 33’s are game changers.

Did you know? In 2019, a 12/3 Universal Year of Inner Child Healing, all 3 and 33 lifepaths are being asked to step up. So, both Brie and Jude are in the right place at the right time.

Conclusion
I hope you’ve enjoyed this peek at Captain Marvel’s numerology. Captain Marvel has a 54/9 vibration, which is about rewriting history as I’ve mentioned above. She really is a spiritual healer, here to bring all corners of the Universe back into alignment. May we all remember our super powers after watching this movie, because the future is ours to create!

Recommended Links
Find Your Lifepath
Star Wars Movie Numerology – The Master Numbers Strike Back
8 Spiritual Lessons from Moana – When The Coconuts Go Black, It’s Time to Get On Track
Starseeds, Numerology and the 11:11 Awakening Code