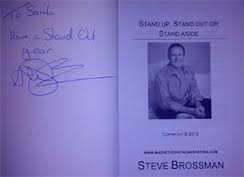 This is the second of five ‘successful author’ readings I’ll be posting over March/ April 2014. All photos have been taken with the writer’s consent.
Steve Brossman is a marketing and fitness guru who’s trained over 18, 000 people. He was the first non-American to win International Fitness Instructor of the Year, and is a two times #1 Amazon best selling author. His wife Pam is a nine times #1 best seller. What a team! I met Steve recently in Brisbane and was fascinated by his unusual hands and genius level ability to explain things.
So, what makes Steve’s hands so unique? And what do they say about his approach to writing?
-Steve has short, bendy thumbs. This gives him the advantage in working with people – he can fit in anywhere, by going undercover in order to observe what’s really needed in a situation. The perfect formation for a teacher and team coach. For more on thumb interpretation, click here.
-He has quite delicate looking fingers on a palm with a heavy base. Usually you see fine fingers on a narrow palm but not here.
Steve’s hands show that he is both airy/ intellectual (his fingers) and earthy/ practical (his palm).
That’s like finding a football star who plays the violin…! Think of the TV show Glee…interestingly, actor Cory Monteith was a life purpose 27/9 like Steve (more on his numerology below) and we did sing in his workshop!
This air/ earth elemental mix has influenced Steve’s career. He helped to invent ButtsOut, a butt-shaped personal ashtray which has sold more than four million units worldwide. Using his brain to save the planet. Makes sense when you see his hands.
-Steve’s hands look more like those of an actor/ director than a writer. No wonder he had his own TV show in Sydney. Steve did mention to me that he finds it easier to coach than to write books. His hands verified that his authorship journey has taken effort to get going.
-Steve has a Simian line on his right (and writing) hand. This is a notable feature. Most people have three main lines on their palm (head, heart, life). Steve has only two (head/ heart and life). That means that his emotions and logic run in the same direction. When he does something he does it 100%.
The Simian line is positive for people who know their life purpose (as they mow down goals like a tank), but can also lead to misunderstandings. The Simian line’s owner can appear very single-minded to others and for that reason it’s good if they have some hobbies or sport to let off steam.
-Steve has radial loop fingerprints on his forefingers (not shown in pic). Radial loops are found on people who are highly responsive to their environment, partners and colleagues. Put them in a jail and they rise to the top of the food chain. Put them in an Olympic training squad and they’ll win a medal. They absorb what’s around them so it’s important they are in a supportive atmosphere.
Steve’s date of birth is 31/10/1957, which makes him a lifepath 27/9 in numerology. That means that his life purpose is the Old Soul/ Guardian. Numbers go from 1-9 so anyone coming in as a 9 has volunteered to be a spiritual tour guide (a bit like a head prefect).
27/9 is the vibration of words like Leader, Money and School. I saw a Teacher’s square in Steve’s hands which correlates that he’s here to keep people on the straight and narrow. Life path 9’s hate wasting time so when Steve said ‘I only work with people who are serious about being coached’, I had to chuckle.
Looking at Steve’s numerology, he’s in a period of patience, rejuvenation and heightened intuition (an 11/2 Personal Year). I’m not surprised we met as I am an 11 life path. He’s bound to meet lots of weirdos like me until his next birthday!
Find out more about Steve’s writing here. I hope you have enjoyed this post. Being a psychic reader is so much fun and I appreciate your support. Please note, any comments made below will be reviewed before they appear online.
You can also book a psychic reading with me in Brisbane or over the phone/ Skype, click here.
With best wishes,
Sarah Yip
Professional Psychic Reader
0408 898 028 (SMS preferred)
facebook: The Numbers Queen

Your October 2022 Numerology Forecast And Video

Your September 2022 Numerology Forecast and Video