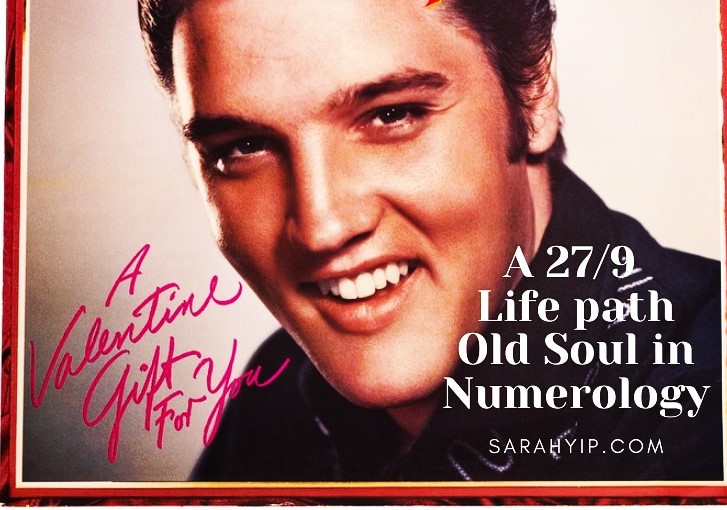 Elvis was a huge numerology fan (his library was full of texts), and I’ve wanted to post on him for years now.

Music is one of the fastest ways to heal and connect people, so it’s no surprise many 9s go into entertainment. They hate wasting time and the media is an instant way to reach the masses.

Elvis was raised on gospel music, it was part of his Soul. At his childhood life path turning point of 9, Elvis was chosen to sing solo in church. By 10 he was secretly entering music competitions and by 11 his mum had bought him a guitar…

His early life was ruled by a 9 Pinnacle / 7 Challenge, suggesting emotional ups and downs and family secrets. Not only did his identical twin Jesse die at birth (many 9s are born to mothers with difficult lives, as 9s are healers), Elvis’s town was hit by a tornado as a baby, his Dad was jailed when Elvis was 3, they lost their house, were poverty-stricken – the list goes on.

His mother Gladys was a 24/6 life path Visionary who doted on Elvis, her old child after Jesse’s death and a miscarriage. She had satiny skin – Elvis called her Satnin.

Soft skin is associated with psychic ability in palmistry and Gladys predicted things for Elvis like a car fire. 6s can worry a lot – Gladys found Elvis’s fame stressful and drank heavily once he left home. Sadly, she died soon after he entered the army.

His father Vernon was a 22/4 Master Builder who was imprisoned at his adult life path turning point of 22 for forging a check to feed his family. At 22, his son Elvis bought Graceland, marking a turnaround in the family’s fortunes.

Children often have shifts when they reach their parents’ turning point ages. Lisa-Marie Presley is a 27/9 like Elvis. She lost him at 9. Her son Ben then tragically suicided at 27 – a significant age for Lisa-Marie and Elvis. I see patterns like this a lot, it’s the reason I urge people to look at their inner circle’s life paths…

Elvis identified strongly with number 8 (and its tendency to be misunderstood), though he was a 27/9 life path.

This makes sense, as he was born on the 8th & his birth name Elvis Aron Presley has an 80/8 Destiny, giving him a career as The Boss (success through effort, professionalism and overcoming odds).

I note that he changed to Elvis Aaron Presley (81/9 Destiny – matching his life path and increasing his compassion and martyrdom issues) in his 30s, however his birth name feels like his ‘real’ name to me, energetically speaking. It’s on most of his documents.

Elvis also had two x 8 Pinnacles in his numerology chart, from ages 28 to 45. So 8 was a strong influence on him – it’s about karmic patterns and can bring obsession and a tendency to overwork / suppress feelings. At the same time, 8s defend the underdog and are generous to a fault when they care about others, qualities Elvis was known and adored for.

In Elvis’s chart, which I’ve researched in detail, his ages of predicted change are:

I’m in a 33/6 personal year. It has been tough but enlightening!!

Note: Numerology readings like the ones I do are incredibly accurate for showing crossroads past, present and future.

However we have free will how we learn the lessons we set ourselves before birth. So please know that numbers are a guide. They should not be your master, but a second opinion after your intuition/ logic…

Thank you Elvis for bringing light, humour and spiritual awakening to the world through your commitment to music and sound healing.

PrevPreviousR.I.P. Connie Tuori, Master 33/6 Life Path Whistleblower
NextPlease, give us the full picture of your 11:11 and repeated number sightingsNext