Farewell Bob Hawke, and Thanks for all the Chocolate (A Master 33 Lifepath in Review) 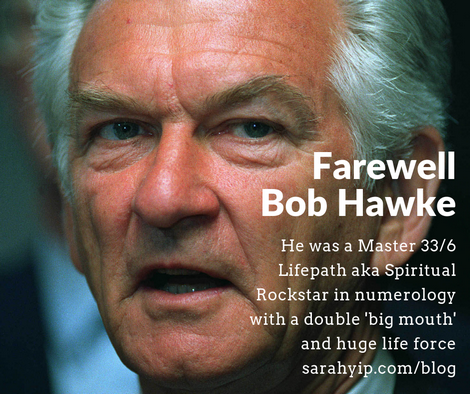 Farewell Bob Hawke, and thanks for all the food! Bob was a Master 33 Lifepath in numerology – 3 looks like lips in profile and 33’s are known for their big mouths, love of controversy and maverick natures. Bob was the longest-serving Labor Prime Minister of Australia. Here’s a quick profile of Bob’s lifepath and name numbers, so you can see how nothing in life is accidental, even with free will at play. We are always kept on Divine track to fulfil our mission and to meet our Soulmates (those who walk the path with us, hence the alternative term, sole-mates…)

Background
I love current affairs and have met countless politicians over the years, through work roles and synchronicity. At 11, I was on a school trip to Parliament House, when a man drove through the doors in his 4WD (which convinced me that, ‘anyone can enter Government, if they just pick the right vehicle’ (!) At 16, I was interviewed on ABC Radio about racism and Pauline Hanson (who is a Master 33 as well). At 19, I worked in the VIP box at the Sydney Cricket Ground (SCG) while studying Environmental Science. The Prime Minister at the time, John Howard, used to come in to sip white wine while his security guard would have a lemon, lime and bitters.

I remember Bob’s visits with Blanche d’Alpuget, mainly because of his shoes (super pointy, olive green contraptions). While the politicians and celebrities mingled, the other staff and I would marvel at their pricey food (the butter alone was $25 a roll, flown in from France) and occasionally nick a chocolate (my pick were the white chocolate Grand Marnier truffles). In hindsight, there were many hilarious moments – like when a visiting ambassador asked me ‘what is VB?’ while pointing at the bar fridge. I’ve always liked people who stand out, and Bob was someone who championed many environmental and social issues, which are topics I hold dear.

As a double ‘3’ which added to ‘6’, Bob was healing his 3rd chakra (Solar Plexus – personal passion, optimism, willpower, inner child) and 6th chakra (Third Eye – vision, ESP, having an open mind vs being superstitious) in this lifetime. He was also helping those around him to do the same. Almost every 33 lifepath I know of, is either running an organisation, extended family, or heavily involved in community work. They have a natural flair for leadership and gathering others together for a cause.

In numerology, words have a vibration (see the system I use). How perfect that ROCKSTAR, PRIEST and TEACHER have a 33/6 energy. Bob Hawke was the rockstar of the Australian political scene (and made many comebacks to support his Labor colleagues). Plus, his father was a Minister and his mother was a Schoolteacher (!) There are no coincidences.

People with Master Numbers in their lifepath or charts (hint: if you see 11:11, 111, 222, 333 you probably fall into this category), often have difficult childhoods as this stimulates early humility, courage and a sense of wanting to help the world. Bob was no exception – his brother died at 17, and Bob almost passed at the same age due to a motorcycle accident (see note below).

At 33 years old, his lifepath turning point, Bob’s fourth child Robert Jr. died in infancy. 33 is associated with Christ Consciousness, and Angels (MICHAEL, BLESSING, WAKE UP CALL and ANGELIC add to 33/6), and I can only surmise that this tragedy would have left a scar in his heart, especially considering the baby was named after him.

His Wikipedia entry says he suffered alcohol poisoning after Robert Jr’s passing – spiritually speaking, alcoholism is associated with trying to block one’s feelings and heart from speaking up. It creates a false sense of flow to cover us our inner sense of desert-ion. Perhaps one dream ended so that another dream (his political career) would be followed? I have read for hundreds of 33 lifepaths and many report huge crises/ breakthroughs at this age as well.

Let’s look at Bob Hawke’s name numerology.
BOB HAWKE (his known name – which is not as influential as his birth name, but worth analysing)
262  81525
=31/4 Destiny The Spiritual Builder – A solid, trustworthy name vibration that resonates to words like FATHER, SCIENCE, DESIGN, GARDEN and BIRTHS. 4 energy is about letting go and letting Go(o)d, a positive name for a Prime Minister. I’ve done further interpretation of Bob’s birth name below.

While Bob Hawke did show some of these aspects, I urge you not to be too black-or-white. We’ve all been the good and bad guys and girls in our past lives. Generalising and scaremongering just takes us spiritually backwards (see my post on Karmic 13, 14, 16 and 19 numerology).  I see 16/7 as an opportunity for someone to learning to use their magic powers to help other people rise to a challenge. It’s VERY common for people with Master Number numerology to have Karmic Numbers in their charts (I did until I changed to my married name). Perhaps we choose this more difficult yet rewarding destiny to help purge old patterns from ourselves and society?

Note: Your name shows how you make a name for yourself and deeply influences your career. Bob almost died at age 17 (just after his name turning point of 16) plus he received life membership of the Australian Labor Party at age 79 (his other name turning point).

Adding the vowels only in Bob’s name:
= 33/6 Soul Urge The Master Healer – Another 33/6, which increases the chance that age 33 would be a significant milestone in his relationship and home life – our Soul Urge informs our relationships and the types of people we partner with. Bob’s first wife, Hazel Hawke was a 30/3 Spiritual Communicator lifepath (33’s and 3’s often attract), who had her son Stephen around age 30.

Bob’s second wife, Blanche d’Alpuget is a 22/4 Master Builder (yes, a fellow Master Number – they also attract each other). She moved to Indonesia with her first husband at 22 (22 energy is about creating long-term partnerships through diplomacy and patience to heal hearts). Adding their lifepaths, Bob and Blanche had a rare 55/10/1 relationship – the vibration of words like INTEGRITY, MOTHER MARY, MOTHERING, FATHERHOOD and also a Fibonacci number. 55 is about constant change and adaptation for beginnings.

Adding the consonants only in Bob’s name:
=46/10/1 Inner Dream The Pioneer – This number shows our deepest calling and is often how people view us. Many Australian Prime Ministers have been 1 lifepaths, as I wrote in this post. Only Bob Hawke and Scott Morrison have been Master Numbers (both 33/6s). People with a 1 Inner Dream have a striking appearance and often appear intimidating or one-of-a-kind. This was certainly the case for Bob. I also note that 46 was the age when he embarked on his affair with Blanche d’Alpuget. As a psychic who works with people to find their Soulmates and understand Divine Order, I believe they were fated to be together – the signs are beyond obvious.

Conclusion
Bob’s list of achievements (and controversies) is so legendary I hesitate to add them all here. Suffice to say, if you resonate with him, definitely look up his life story, especially if you have a 33/6 lifepath as well! This is a type of Superman role (Christopher Reeve was a 33/6 too – note the contrast between his acting role and real-life paralysis). I admire Bob for many things: overcoming his alcoholism, helping stop apartheid in South Africa, outlawing sex discrimination, bringing in Medicare and for halting the Franklin Dam in Tasmania. At the same time, I am not a huge fan of Labor these days, being more supportive of the independent candidates. In the end, Bob Hawke threw himself wholeheartedly at life and truly showed us the power of positive thinking, actions and community. May his Spirit move on to even greater happiness next lifetime. Goodbye Bob, we’ll miss your honest courage.

Recommended Links
Bob Hawke’s moving letter to a young girl on dying (many 33’s have the gift of writing – think Stephen King and Agatha Christie)
Find Your Lifepath and my 11:11 page (I knew which photo to purchase of Bob, because it was dated 11 November! Purchased from Allstar Picture Library / Alamy Stock Photo on 17 May 2019)
Your Life Purpose and Name Gifts Revealed – a webinar I created in Feb 2019, to help you kickstart your self-discovery
Alcoholism – A Metaphysical Guide to Healing (a blog on Al-Anon, which I call Angels-Anon, is coming soon)
More Famous People Psychic Reading

PrevPrevious11:11 and Meeting Your Soulmate or Twin Flame – New Video with Kris!
NextWhat’s Your Australian Animal Totem in Numerology?Next