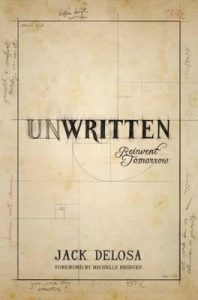 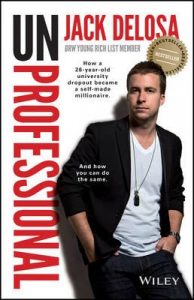 his is the final of five ‘successful author’ readings I’ve posted over March – May 2014. Hand photos have been taken with the writer’s consent.

15 May update: I was chuffed to receive Jack’s response – “Well done Sarah, absolutely amazing and spot on. VERY accurate. ” Ahhh, I love my job.

Jack Delosa is a millionaire and one of Australia’s top entrepreneurs under 30. He’s known for his compelling book Unprofessional (launched in 2014) and for running two business education institutions, The Entourage and MBE Education. UPDATE – Jack’s newest book Unwritten is also a cracking read and very spiritual in undertone.

I met Jack recently in Brisbane, and was impressed by his ability to cut through the cr*p while teaching his proven models for business success.

What do Jack’s hands say about his leadership style and personality? 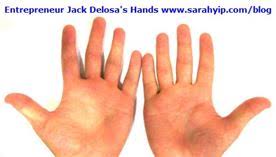 -Jack has thick thumbs with a tapered tip, indicating he has a ‘good grip’ on reality and is very persuasive (more on this in his numerology below). The big gap between his thumbs and forefinger indicate a generous nature.
-Wide palms are the sign of an energetic, restless personality who loves to travel.
-A slight Girdle of Venus and chained Heart Line (not visible in this photo) indicates he’s overcoming trust issues in this lifetime, and may have artistic or musical talents (also in his numbers). See more on the Girdle of Venus.

-His Fate Line is lightly marked, which you expect to see in self-made people. The stronger the Fate Line, the more someone relies on Divine Intervention to look after them.-His low-set Mercury finger is a sign of a writer, and someone who becomes more successful with age (especially from 29-30). See this article for more.

When I asked Jack his tips for overcoming self-criticism, he said that the voice never disappears – successful people just ‘do the work’ anyway. See this book he recommended or my article on the topic.

-His slightly bent Saturn (middle) finger on his left hand (non-writing) may show someone who’s sensitive or shyer at home or under stress.

-Jack has a stronger Life Line on his right (writing) hand. This reflects improved health and a greater will to live after 20. His Mercury (Health) line, which ends under his pinky is red, which is a sign of detoxing. Not surprising as he had finished a long day when I took this shot.

-He has a Composite Whorl fingerprint on his right thumb (not shown in photo). I’ve seen the same print on another entrepreneur and philanthropist, Peter Conna. This print gives Jack psychic ability and a deeply philosophical, spiritual nature (which he confirmed on the day). 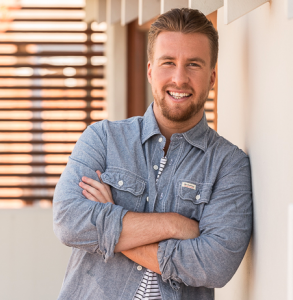 Jack’s date of birth is 21/2/1987, which makes him a lifepath 30/3 in numerology. That means his life purpose is The Artist/ The Expressive. The number 3 looks like lips (see pic). It represents speaking up for yourself and others. The ‘0’ acts like a magnifying glass and means he wanted to nail this  spiritual lesson. Discover your lifepath

30/3 represents the Solar Plexus Chakra, which is the centre of will, ego and creativity. Someone with this life path is here to use these qualities for good, by conquering insecurity and lack of focus. They bond well with kids and youth because part of them never wants to grow up. No wonder Jack loves helping budding entrepreneurs so much.

Words like HAPPY. PASSION and SCEPTIC reduce to 30/3 in numerology (hm, you can’t be happy listening to the naysayers right?). Australia has a 30/3 vibration – 3 is the number of luck and Australia is known as the lucky country, after all. Many entertainers and public figures have this life path, e.g. Jackie Chan, David Bowie, Rihanna, Cameron Diaz, Hillary Clinton and Jack Welch.

Life path 3’s cannot be easily taught or led. Jack dropped out of high school and university to start a business, and has since worked with the likes of Richard Branson and Microsoft. Looking at his birth chart, with the double 2’s (for intuition), missing 4-5-6 (low conformism) and 7-8-9 line for action and creativity, Jack was always going to rebel.

The missing 4-5-6 occurs in many pioneers’ charts. It shows a need to find ‘the middle way’ instead of going to extremes. Jack learned this by going into massive debt at 19, which is why he now believes failures are a great lesson. Read more on the ‘black sheep’ line.

The name JACK DELOSA adds to 27/9, the vibration of the word LEADER. 27/9 is associated with people who were persecuted in past lives. This may partly explain Jack’s popularity in this lifetime (The Entourage has 35, 000 members alone). He comes across as someone who will fight for the underdog.

Jack has been in a 30/3 Personal Year (the same as his life path vibration) since February, which makes this is one of the biggest years of his life. February and November 2014 are key months for success while July will bring fresh starts and simplification. September could be busy and hopefully he won’t get too stuck into junk food then (3’s can get cravings under stress). I should send him some raw cheezecake from Suki at ROAR FOOD…she has a similar life path.

-Check out my other Famous People numerology and palmreadings.

PrevPreviousPalmistry & The Girdle of Venus – The Pros and Cons of Sensitivity
NextHappy Full Moon Friday 13 June! Will You Go Looney? The Luna Mount in Palmistry ExplainedNext