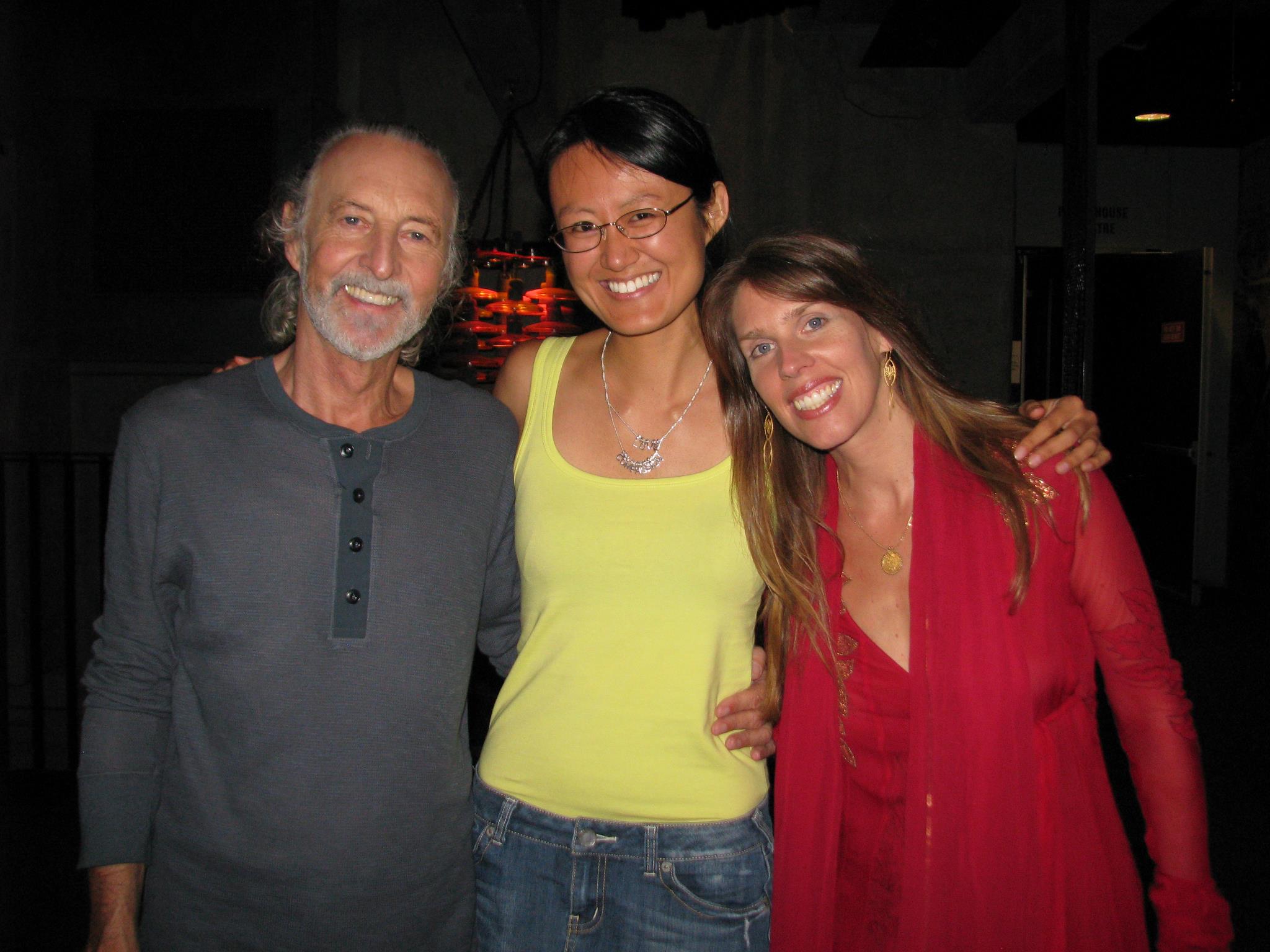 Deva Premal and her partner Miten are loved by millions of people around the world for their transformative mantra music and meditations. To my ears, Deva’s voice is ‘pure angel song’. I have been fortunate to meet (and hug) Deva a number of times in Australia. Her version of the Gayatri mantra has been my go-to during many dark nights of the Soul.

The first time I saw her walk on stage at the Brisbane Powerhouse, I had an extreme reaction – the blood rushed up my spine and heat started pouring out of my hands. Since then, I’ve recognised this as a sign of kundalini ‘awakening’ and past life recognition.

Chanting has been a Godsend for me. It is one of the ways I’ve overcome panic attacks and writer’s block. Now, I recite mantras daily to stay ‘in the flow of manifestation’. I remain forever grateful to my friends Dave Hume and Rob Stevenson who introduced me to Deva and Miten’s music.

Deva performs with her partner Miten and the gifted bansuri flute player Manose. Here’s my psychic reading for Deva, based on her name and date of birth. I have seen Deva’s hands (not shown here). Her palms gave me a shock, because she had fine lines and sensitive skin like me, which I wasn’t expecting. Looking at them, I realised that gentleness could be a gift. Since then, I often say to myself ‘if Deva can do it, so can I – I don’t have to hide my feelings’. Although I love palmistry, I felt that numerology would give a more accurate picture of Deva’s extraordinary journey.

Deva’s feedback on this reading was: “Hi Sarah, Thank you so much for the reading. I am so touched you would take the time to dive so deeply into my life situation! And you put a load of research into it…I could see myself in your reading (which wasn’t difficult because you said such beautiful things about my life. And this is what I feel about my life as well). I hope we get to see each other this time when we come…maybe at our concert in Brisbane (Jan 19) or at the retreat which is in Mullumbimby this time. Would be great! WIth love and big hugs to you from us both, Deva.” (We brought baby Forrest backstage to meet them all on their next trip, which was lovely.)

Deva’s Magical Numbers
Deva Premal’s birthdate is 2/4/1970, giving her a 23/5 Rebel Life Purpose. She was born to a gifted musician mother and artistic father in Germany. Find your lifepath

In numerology, 23 is the ‘Royal Star of the Lion’. Words like ‘LIFE’, ‘LION’ and ‘KING’ have a 23/5 vibration, hence its association with spiritual authority. A 23/5 lifepath brings protection, abundance and grace to the owner, as a reward for good deeds in the previous lives. SHIVA adds to 1+8+9+4+1 = 23/5, so Deva is protected by this powerful Hindu deity, known as the patron of yoga and the arts.

As a lifepath 5, Deva has an active 5th, or Throat Chakra, which is the human voicebox and seat of intuition. This blesses her with a strong desire for expression and curious nature. When in balance, she is a vibrant agent of change who looks ‘forever young’. When out of balance (for example during a Mercury retrograde), she may be scattered or tired. She can also be overanalytical at times.The throat joins the head and heart. It’s the con-neck-tion point for our thoughts and feelings. So it’s important for Deva to stay physically and mentally flexible in her neck and upper back. More on healing a stiff neck

We all have four seasons of life (called ‘pinnacles’ in numerology), comprised of 9 year cycles. The ages at which these seasons occur are calculated from our date of birth. We alternate between years of ripening, success, challenge and recovery. It’s these ups and downs, which create the musical score of life. Knowing your personal years and lessons gives you peace of mind and the ability to enjoy what’s in front of you.

Numerology does not predict exact events, but does suggest when opportunity will come knocking. You always have free will to say no to what’s presented. We live in an elastic Universe – it will never give up on you! It’s like a puppy that loves to cuddle.Let’s look at the first 50 years of Deva’s numerology…I’ve used a system developed over thousands of sessions with clients.

Deva’s Peak Years for Happiness:
Codes: SD Self Discovery i.e. a deepening of confidence in her 5 Lifepath/ Personal Year, EB Endings and Beginnings i.e. of a 9 year cycle. I have not shown workings or listed all albums, for brevity’s sake. Some timings are out by a few months, due to her April birthday. The info below is taken from online research and has been verified by Deva.

9/10 SD Deva had a short-lived interest in Christianity, before becoming a devotee of Osho and taking on her current name.
13/14 EB & 18/19 SD Deva left Germany to live in Osho’s ashram in India. At 20, she met Miten. Osho passed away this year, which resulted in a period of introspection and heart healing.

22/23 EB – Deva is a 23 lifepath, which means her purpose became super clear from this age onwards. Interestingly, Deva began touring with Miten at 22 to offer concerts. She was very punctual!
27/28 SD In 1997, Deva released Trusting the Silence with Miten. They also started doing voice workshops and holiday retreats. She released The Essence in 1998, which was her debut as solo singer.

31/32 EB & SD (completed her first season of ‘self love’) In 2002, Deva and Miten performed for the Dalai Lama in Germany. She also released Embrace, which took longer than expected to create. (This makes sense, as Deva was going through a major change period, which occurs only 4 times per incarnation. During this time, we’re asked to ‘let go and let God’.)
40/41 EB (completed her second season of ‘creative rebirth’) In 2010, Deva released Mantras for Precarious Times, followed by Tibetan Mantras for Turbulent Times in 2011, recorded with The Gyuto Monks of Tibet. This was groundbreaking, as Deva was the first Western woman ever to chant with the monks. All proceeds went to the Gyuto Monastery and other causes.

43 – Deva Premal’s name adds to a 43/7 Destiny, so her career peaked here. It was in 2013 that Deva and Miten released their first 21-Day Mantra Meditation Journey as well as two more albums.
45 & 47 SD I’m looking forward to seeing what Deva does next.
49/50 EB (completing her third season of ‘spiritual teaching’) No doubt this will be a powerful time – Deva’s last seasonal changes coincided with singing for the Dalai Lama and recording with the Gyuto Monks…

Deva’s Challenge Years:
During our test years, Spirit invites us to address our weaknesses and sore points. These years are uncomfortable but often productive. Past life healing is favoured. We have less challenge years than happiness years (thank goodness!) in this system of numerology.

15, 17, 24, 26 and 35 (esp. from May/ June) Deva and Miten chanted The Gayatri Mantra to her father as he was dying in July. Deva’s father had chanted this to her daily in the womb, so they had a very profound journey together. Watch this video for more.

37 & 44 (esp. from May/ June) In mid-2014, Deva had another turning point in consciousness. This period coincided with the release of Mantras for Life Miten and Manose. It will lead to better things from April 2015, once she enters her lucky 5 Personal Year.A big thank you to Deva for allowing me to delve into her fascinating history. You are a light and I wish you infinite joy for the years ahead. See you again soon. Follow Deva online or via her facebook page.

BTW Deva and Miten also believe in 11:11, and have held meditations at this time globally!

PrevPreviousFinding Spiritual Relief From Anorexia – A Metaphysical View
NextEllen Degeneres sees 11:11 too, so I’ve sent her a psychic reading!Next