A spooky story about my 11:11 article in mX newspaper 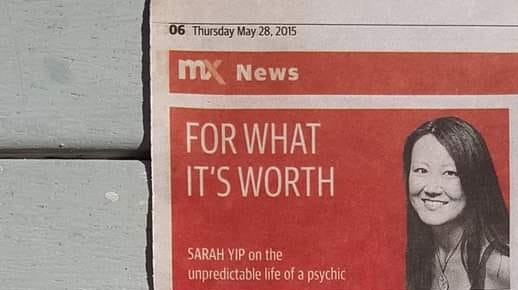 Spooky but true! I told Kris, my husband, that if I got 11:11 into a paper, Rupert Murdoch would shut it down. Felt the nudge to write for mX (a free commuter newspaper) about psychics. After a week, my words were published on 28 May 2015. The next day, they announced mX was closing…!!

Next to my article, were pro-spiritual tips, plus the centre image was Gwen Stefani (a 29/11 life path Spiritual Messenger like me) and the puzzle had 11 11 in its centre.

Clearly, the editor was an amazing being. I wish I could have thanked them more. I’ll have to look them up.

If you want to know why people don’t trust psychics, it’s because the industry is unregulated, plus mainstream media sidelines genuine readers who question authority. It’s not so bad in America, maybe that’s why 30-40% of my clients live in the U.S.

See my post if you think it’s expensive to hire a professional psychic, wait until you hire an amateur

I have been cut from ABC, QWeekend and other major outlets, sometimes minutes from my interviews. Over and again, the journalists say they are frightened of the backlash or their bosses hate psychics.

Even when I say I’m a scientist who worked for the Australian Government and U.N., they think I’m a risk.

This is why I ask you to comment publicly whenever I go on air with 97.3fm or published by Yahoo. See my media articles and interviews

Check out my September 2021 numerology forecast, as an example.

Full text: “Think your life is complex? Try being a psychic. That’s right, a psychic, not a psycho (although I’ve been called that too) but someone who predicts the future for a living.

The perks can be great (my washing never gets rained on) but you also attract doubters who ask: “If psychics are for real, then why do they ask what your name is?”

I tell them it’s because they need your permission to give a reading. What I’m really thinking is: “It’s because most people would faint if a psychic guessed their name and our insurance doesn’t cover concussion. Bummer, huh?”

Anyway, real psychics don’t brag. Fame attracts negativity and trolls and most of us crave the simple life.

But sometimes you can’t help but make a scene. Like the time a girl said she was “a sceptic” – before I drew a picture of her favourite undies (Bridget Jones-type granny panties). Her friend peed herself laughing.

Or the time I evicted a ghost from a building. The lights flickered when you called his name – surreal.

At times like those, I’m grateful for my gift. But there are drawbacks. Psychics are sensitive to stress. I had full on cystic acne and panic attacks during Year 12. Not nice.

And it sucks when people go out of their way to tell you that psychics go to Hell. I’m like, “Hey, you don’t even know me! I’m a scientist, not some crazy hippie!’ But then I think of all the good in my life, like my awesome soulmate, clients, and the 11:11s and triple numbers that I see as confirmation that I’m on track.

So, to those who say that psychic readings are a waste of time – just remember the Chinese saying: “A closed mind is like a closed book; just a block of wood.”

Don’t cut someone down just because they’re different. Diversity, like intuition, is what makes the world go round.

Sarah Yip is an mX reader who had no doubts that this article would be published.”